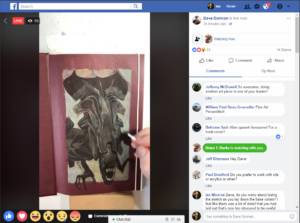 Lately, one of my favorite things to do is to check out art demo videos on the internet.

It’s always fascinating to watch someone who’s an expert at something do their thing in real time, particularly in creative pursuits. Often, when a person encounters a work of art, it’s in the context of a final, finished work. Perhaps it hangs in a gallery, or appears on a book cover, or perhaps in a magazine or in an advertisement. And of course, I always enjoy seeing finished works. But it can obscure the fact that reality has a surprising amount of detail, and just having a look at the finished work (particularly if it’s a reproduction, and not the original) doesn’t reveal the process by which the work came to be. Why did they make this decision? How did that detail get made? Where were the mistakes or the false starts?

When I was a kid, the only time you’d ever get to see artists actually producing work was if you took a class, or you watched Bob Ross (or his many imitators) on PBS. Thankfully, in this day and age, we can often get a much richer experience of an artist’s creative process.

A quick YouTube search turns up a zillion tutorial videos on any number of topics, in whatever medium you like.  Like this fellow doing a portrait in oils:

Or maybe you like digital paintings? I know I do. There is a whole genre of videos called “Speed Painting,” which can be amazing; you get a time-lapse of a whole work coming together:

Painting not your thing? Why not check out a sculpture video?

Maybe you’d like to hear the artists talking about the techniques as the work unfolds?

Perhaps there is a particular style or artist you are fond of, and you’d like to learn more about how they made their works.

No matter what kind of art you’re into, there’s someone making videos showing off how they do it. That’s why it’s become one of my favorite ways to spend some time; you can get art lessons from all across the world, in any style or medium you like, at a moment’s notice. The whole world is your art teacher.

Oh, man, I wish there was some kind of portable rig for this kind of thing. So interesting.

We have featured Nobumichi Asai’s real-time face tracking an projection mapping in the past. Asai and his team are back with yet another fascinating video. Mapping a highly detailed projection on to any surface can be a challenge… I’ve got the perfect spot for that.

If I were in Los Angeles, I’d go to this.

A beautiful video featuring a whole bunch of great time-lapse footage from around the world, via reddit. Here we see maps hung in the preview room before our rare books and manuscripts auction. Nice display, eh? All those red stamps are the seals of previous owners

How do you find out who are the sharpest, most creative designers in the world? With a good, old-fashioned, graphic design battle, of course.  The 2009 Cut & Paste Digital Design Tournament pitted the best graphic designers against one another in a competition like no other.  Armed with state-of-the art computers, designers squared off on the stage of the Congress Theater on Saturday to determine who would represent Chicago in the global finals to be held in June in New York.

This story was first published on the Medill Reports website on 4/7/2009.  Republished here for my own archives.