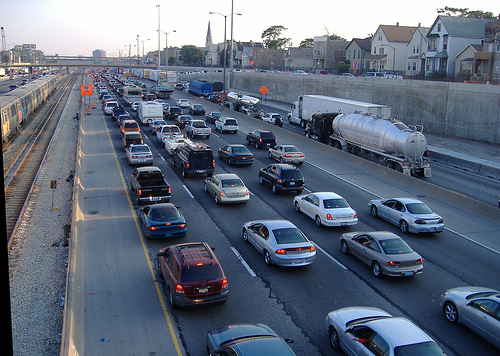 However, since I’ve been needing to get to work on time in the mornings for the last few months, I’ve been doing a fair bit of driving, between home in Rogers Park, and work in the West Loop, a commute of about 10 miles.

Now, anyone that knows me well knows that I’m a pretty safe driver.  My philosophy is that it’s more important to arrive safe, in one piece, with no damage to your car, than it is to arrive exactly “on time”.  Consequently, I follow the speed limit (generally), use my turn signals when changing lanes, and I like to do my best to be courteous to others on the road.  In exchange for these little things, the universe has generally tended to be good to me.  I’ve never been in an accident that was my fault.  I’ve gotten a ticket or two before, but you could count them all on one hand.  I’ve never killed anyone.

But I have to say, driving in Chicago is really, really a pain in my ass.  I’m sure it’s the same in every bigger city.  Here’s why:

Ok, I know, everyone hates the traffic.  There’s not much that can be done about it.  More people = more cars = more traffic.  It’s unavoidable, but I hate it still.  I mean, it can take me as much as an hour to drive 10 miles in the city.  That’s just ridiculous.

Hey hipster, I know you’re in a rush to get to Whole Foods to pick up some tempeh for your girlfriend’s vegan potluck stich-and-bitch, but that fixed-gear ten-speed you’re riding counts as a VEHICLE.  That means you’re obligated to follow the same laws as every other vehicle.  Which means stopping at stop signs.  Which means not zooming in between cars which may well start moving on you unexpectedly.  Which means signalling when you intend to turn.  Oh, or does your zero-carbon-footprint entitle you to act like you’re the only person on the road? (Edit — this goes for you motorcycle jerks too.)

So, if you have an Illinois plate and you want to park in the city, you have to buy a city parking permit.  Which authorizes you to park … well, nowhere, actually.  Anywhere you’d want to park requires you to pay.  Now, ok, fair enough, the money benefits the city, right?  Nope.  Actually that parking money goes to a private corporation.  None of it goes to the city.  Unless of course you’re parked illegally, in which case the “Department of Revenue” (oh, the delicious honesty) will ticket you.  Because you didn’t pay the corporation.  Three tickets and it’s the boot.

A week or so ago, I was driving my normal route home, when I discovered that traffic was extremely snarled in an unusual way.  After meandering for about 25 minutes to make it a mile, I saw why.  Some idiot had driven his 18-wheeler under the Loyola Red Line stop without taking into account the clearance for the trailer, and had peeled back the top of the trailer like the lid of a sardine can.

This is why we have truck routes, people.  This is why trucks are prohibited on many roads.  If you don’t know where the truck routes are, YOU’RE NOT QUALIFIED TO DRIVE A FREAKING TRUCK.

Seriously, taxi drivers, I hate you.  You are the worst.  Literally, the worst.  Your driving is like a fart on an elevator.  It stinks up the whole place, and latches on to your clothes, so the stink is still around even after you’re gone.  Taxi drivers are such terrible, terrible drivers, that they make MY driving worse, simply by being on the same road as me.

I’m seriously thinking about filing a FOIA request to find out how many accidents in a given month involved taxis, versus how many were simply private individuals.  I’m willing to bet that taxis are the single greatest cause of fender benders in the city.  By a wide, wide margin.

And tell me, who are they constantly talking to on their bluetooth headset?  Is the life of a taxi driver so incredible they all have to narrate it constantly to some mysterious third party?

10 thoughts on “Top 5 reasons why driving in Chicago sucks”