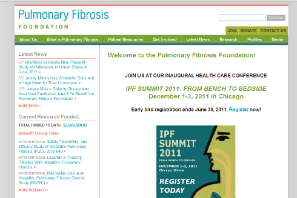 (2011) This is a Drupal 6 website for a Chicago-based, national non-profit medical organization.

The site was originally designed around the Zen framework by a different developer. I was brought in to support the site after the original developer became unavailable. I was tasked with making some programmatic changes in Drupal, including Views, Contexts, and Books. Additionally, I re-worked their theme to make it more modern, and more consistent with their current branding. Click here to view their current live site.