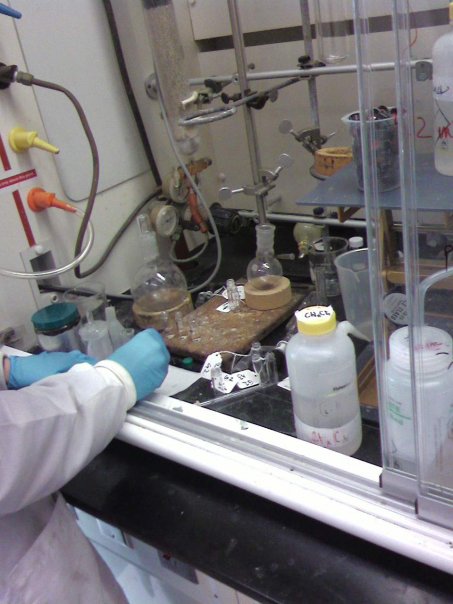 So, I spent the last week working on a practicum assignment, which was basically to hang out with some scientists, and watch and learn what the day-to-day work looks like in the universe of nanotechnology.  Luckily, Northwestern University has one of the most advanced nanotech facilities in the nation, and I was lucky enough to get to spend the week with researchers there.

First of all, I should say that the entire experience was a made much more pleasant and practical by Denise Dooley, the outreach coordinator for the International Institute for Nanotechnology. She helped set up various meetings with scientists at the Institute, and arranged for me to observe several experiments by their researchers. She was quite helpful and very courteous through the entire experience, and I owe her a big thanks.

Want to know the gory details?  Hit the jump for more:

The first day of actual practicum work was Tuesday. After I met briefly with Denise at her office, she took me to meet with a third-year PhD student named Emily Pentzer, who works with the Nguyen Group. Emily was working on experiments involving polymers – specifically, she was working on creating a biodegradable polymer, one that would easily break down in the body. Ultimately, this sort of polymer could be used as a drug delivery vehicle. But her goal on this day was to experiment with the synthesis techniques in order to reliably produce the polymer that she was looking for. The precursor chemicals were unstable, and so most of her work happened in a glove box – that is, a box in which there is no oxygen, where the atmosphere has been replaced with argon or nitrogen, and you can work with unstable chemicals safely. After carefully mixing the precursors, she let the samples react for three different time periods in order to measure how well the reactions occurred. As the time limit was reached with each sample, she added a chemical that would deactivate the catalyst, and stop the reaction. At the end of the experiment she wanted to measure what kind of chemicals actually came out of the reaction, so she stained a small slide with a little bit from each of the samples, then left the slide to rest in a small container that held iodine. After a short period of time, the iodine stained the samples on the slides so that she could identify exactly which polymers were present. As it turned out on this occasion, she didn’t get exactly what she was looking for out of the experiment, and of course she noted the results.

Emily was very nice, and took great pains to explain the processes involved to me. She also gave me a good bit of literature on the subject including some papers that she and her coworkers had produced and published. It was a fun day.

On Wednesday, I went to the ANSER Solar Energy Symposium. This was a conference that was put on jointly by Northwestern University and the Argonne National Laboratory. Over the course of the eight-hour conference there were nine speakers on a variety of topics are related to solar energy and nanotechnology. Amongst the speakers were Michael Wasielewski, Tobin Marks, and Mark Ratner. Unfortunately for me, the conference was extremely dense and technical, and because I did not have sufficient background in chemistry and physics, I didn’t get as much out of it as I might have. It was still interesting, though. Most of the technologies that they discussed constituted incremental improvements and new areas of research, but it didn’t sound to me as though there were any major breakthroughs to be announced. Of course, that may not be true, it may be that there were breakthroughs that were hidden in the dense presentations, but I wasn’t able to recognize any. Nevertheless, an interesting day.

On Thursday, I had lunch with Matt Banholzer, of the Mirkin Group, and several of his associates. The Mirkin Group seems to be concerned primarily with creating new kinds of detection systems for various biological and chemical markers. One person who had lunch with us was a young undergraduate student, and she was primarily interested in working with quantum dots as a detection system. Another fellow at lunch said that he was working on a technique of using complementary DNA strands as a way of attracting drugs to specific cells, such as cancer cells, in the human body. Matt, a third-year PhD student, went through a process of nano fabrication with me after lunch. Basically, the structures that he was building used gold nano wires as a sort of resonator, or tuning fork, to increase the catalytic capacity of titanium dioxide. The fabrication technique was quite interesting. He started with a thin layer of silicon that had small pores through its structure. He then used electroplating techniques to lay down the thin layers of material, in a very ordered way, on top of the silicon substrate. The idea was to build up material in these small pores, which, when the substrate was dissolved, would leave behind nanowire structures. First, a layer of silver was laid down in order to make the surface more regular. Then, a relatively thick layer of nickel was laid down. Then a thin layer of gold, another layer of nickel, another layer of gold, and then finally another layer of nickel and then titanium dioxide. The goal was to use the nickel as a spacer which would then be dissolved away, not unlike lost-wax casting in sculpture. The layers of gold were spaced a very particular distance apart in order to take advantage of the resonant properties of nanoscale gold. It was really a fascinating day, and Matt was a particularly good teacher, in that he could explain very complicated topics in a way that made sense very easily. He even gave me a small vial of 15 nm gold nano spheres suspended in water. A neat little addition to my collection of unusual objects.

On Friday, I spent some time with Jessica Malin, another PhD student, but this one with the Geiger Group. The experiment she showed me was designed to build a theoretic model of how uranium travels through groundwater systems. This sort of model would be useful in predicting pollution hazards and making determinations about which areas might need to have more environmental protections in place. Her experiment was structured in such a way that water which contained depleted uranium was passed through a space that was designed to mimic the properties of groundwater, specifically by using a transparent silicon lens. A laser was tuned to the resonant frequency of the uranium atoms, and then was shown through the silicon layer. The uranium atoms would be excited by the laser, and give off photons both at its own resonant frequency, and at resonant intervals. A photon detector on the other end watched for photons coming in at the second resonant interval, or half the frequency of the laser. This made it possible to detect individual atoms as they moved through the interface. This experiment was purely to collect data which would then be turned into a theoretical model, so it was largely repetitive and very precise, with many measurements taken. It was an interesting experiment insofar as it reminded me how important resonances were, and how useful they can be in collecting information about physical systems.

Overall, I would say that the entire practicum was an extremely interesting experience. Even though many of the projects I was exposed to were very advanced, they became easy enough to understand after being explained by somebody who worked closely with them. In particular, I found the notion of using DNA to target specific cells in the body very interesting, and I thought that watching an actual nano fabrication process happen was extremely educational as well.

Honestly, I don’t know how else I could have possibly had this sort of experience had it not been for doing it through Northwestern University. To get that kind of access to laboratories and scientists for the amount of time that I had, seems extremely hard to come by, and I feel lucky for having gotten to do it. While I was trepidatious about the practicum experience before I knew where and how it was going to happen, I’m now convinced that it was an extremely worthwhile assignment, and I enjoyed it very much. Everybody should have a chance to get exposed to science like that at some point in their life.